Heather Hodges Daigle contacted us on August 21st through the “Workana” freelancer platform, saying she wanted us to make a web page for her. She told us she was a physician, and she was on a mission in Hawaii providing health services due COVID-19; she also told us she couldn’t speak with us too much because she was very busy. She wanted a budget to design and develop a web page for her restaurant, since she was going to work on it when she returned.

The story didn’t seem strange to us at first, since our company works with CEOs from the whole world; they all do their work and we do ours.

Our team sent her a proposal to make the web page for 2100$ as fast as possible, she answered our message by saying it was alright, that she wanted an address to send us the paycheck.

We immediately got in contact with our representative from the United States.

It’s normal for us to work with companies that prefer to use checks as a payment method. We’ve worked with companies from Mexico, Dubai, United Kingdom, etc.

We sent Heather Hodges Daigle an address for her to send the paycheck, then we spent several weeks without receiving an answer and without any further details about the project.

Our representative’s cell phone number was in the address provided to Heather Hodges Daigle. Our representative from the United States got nervous and he started texting both of us, giving us orders. He sent us the shipping’s tracking number, pointing out it was going to arrive by Friday, September 4 2020.

For some reason, Fedex was unable to deliver the package that day, so we went to their office on September 8 2020,  because September 7 in The United States is Labor Day, so Fedex wasn’t going to be working.

THAT’S WHEN THE SCAM PROCESS STARTED

this was the check we received

the person who sent the check

Our representative had clear instructions to receive a check and deposit it in our account. However, the check was delivered for a higher amount than the one we charged for our work. The paycheck was for 5000$.

Heather Hodges Daigle started calling and texting us immediately, stating that it was all a mistake and we had to return the rest of the money, that she needed it urgently.

This was rather uncomfortable for us since we planned to receive a payment for 2100$.

Our representative didn’t know that the real amount of money was for 2100$, so he deposited the money.

A few hours passed before Heather got violent. She was constantly calling and texting, demanding us to return the money.

This seemed very strange for us because our initial image from that “physician” was that she didn’t have the time for calls or whatsapp.

She started to threaten our representative, saying she was going to send her uncle from the FBI to his address to imprison him. That he was stealing her money and he either returned it right away or he was going to jail.

Our representative got scared and sent 500$. In a couple of seconds we received an alert from the bank, informing us that we may have been dealing with a scam. However, Heather never knew about that and we continued to ask for information to know who was behind everything. We played along, saying that we were going to return the money to her.

These are the bank addresses that were provided to us:

That’s when we realized that this was indeed a scam. She sent the information for several bank accounts with different names and addresses.

The next day, we managed to go to the bank. They gave us exceptional attention and told us that the paycheck was indeed a fake. The company does exist, but the paycheck doesn’t belong to them. This is a mistake that I can’t fathom in The United States, how can you deposit a check, have the balance added to your bank account, when the money doesn’t really exist?

¿How do we know it was Heather R. Hodges, who ripped us off?

We put her email ([email protected]) in the search of Facebook and we found a few profiles. Named by Zombabe Daigle immediately I recognized her name by “Levana Rose” 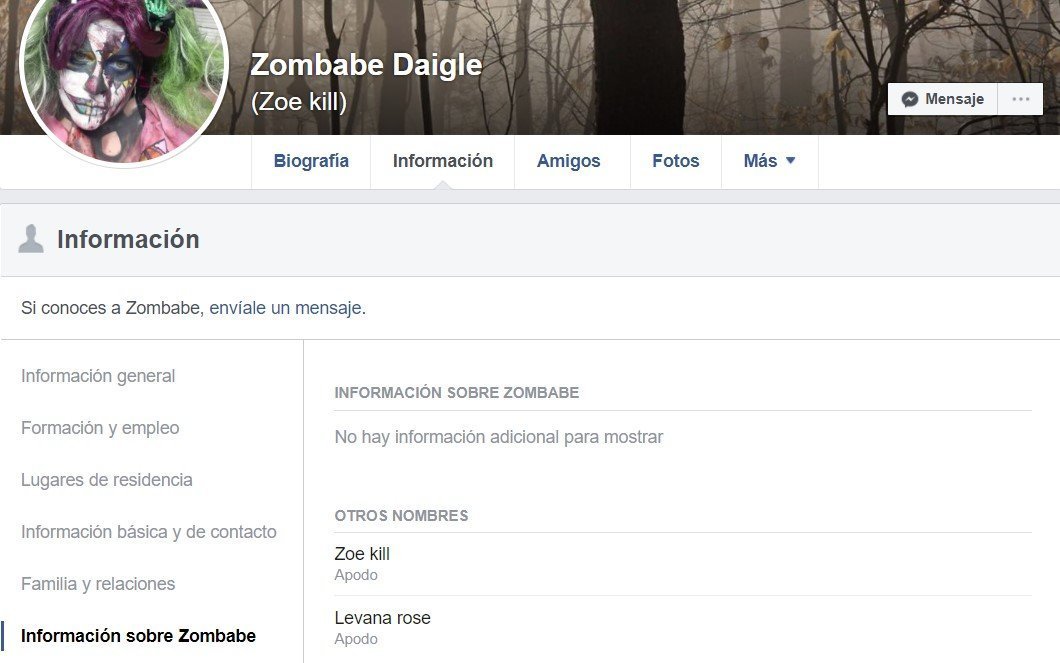 We triangulate her friends and family nearby and found every one of the Hodges family, I wrote to many family members, without doubt, some of them blocked us, others did not contact us. No one could help us, I supposed what Heather did is told everyone we found her and put on high alert her family before I could get contact with their family. I assure you that she made up a story and other lies to be victimised.

Only one person that knew Heather answered, her name is Amy Ester, with what I got in contact, I told her what was happening, I showed her some of our conversations and she commented that the number where they were typing was from “Heather Reene Hodges Daigle». 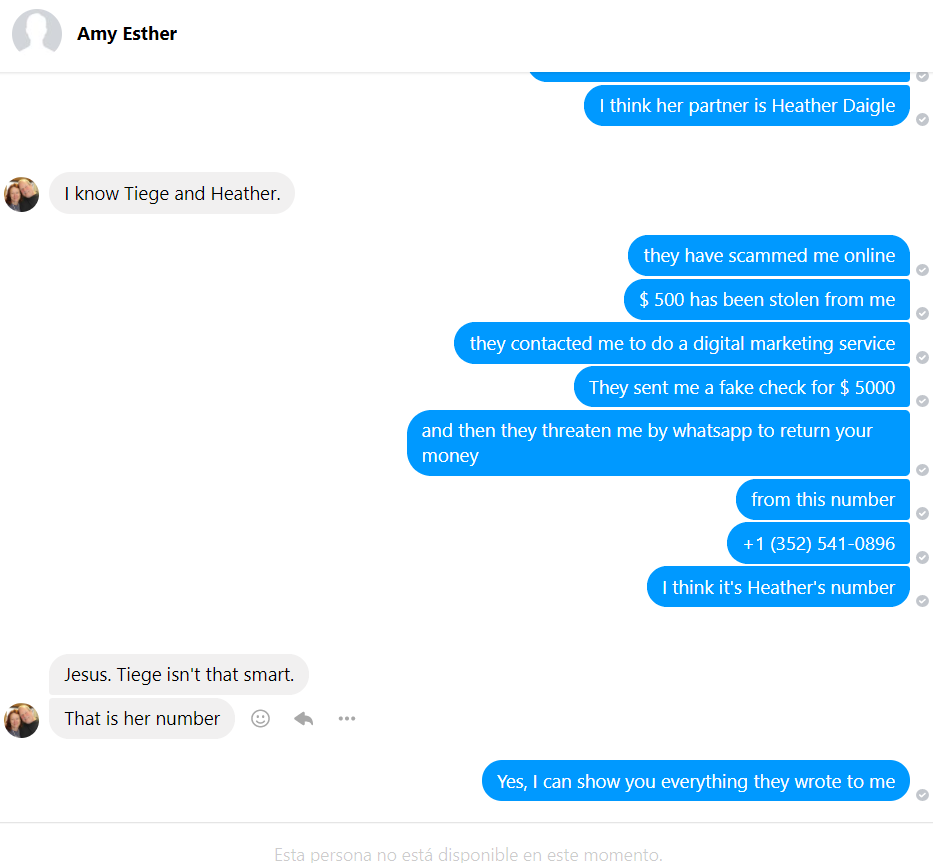 I supposed Heather did know that we were searching her, discovering her identity, different profiles, of what I got a contact in. Passing by as she didn’t know what was happening, asking what happened? why are we questioning her?

I questioned Heather if she received a transfer of 500$ and she confirmed it and she transfers it into bitcoin. I asked her is that her WhatsApp and her number said it was hers but she didn’t know WhatsApp.

I knew that this was her, her family member Amy Ester confirmed. Later to be blocked and delete her information, How a person that knows to buy bitcoin but doesn’t know how to use Whatsapp? In the beginning, she has been lying and confusing others. 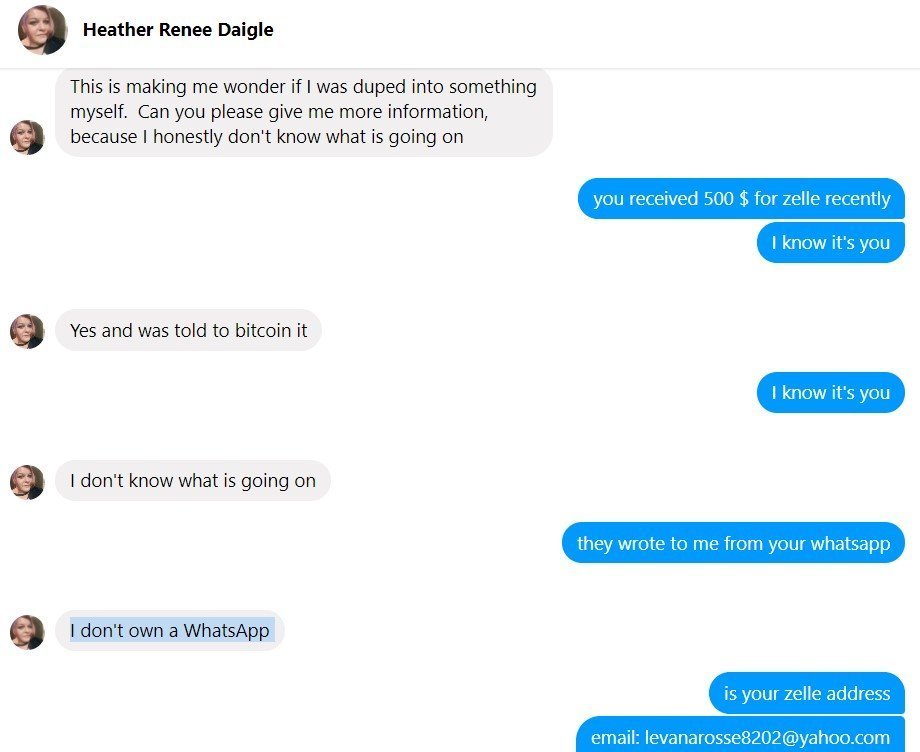 We later investigate finding her tik tok and then confirm that she is a person that uses many social media, she knows how to use Facebook, Twitter, etc, and she knows what is she doing. Deleting every information about her.

I hope someone can help us, I will be trying to contact her and her friends and family. I will take this information to the proper authorities so that they can stop Heather.

If anyone wants to contact me please do so at my email: [email protected]

here you can see the different profiles of heather: 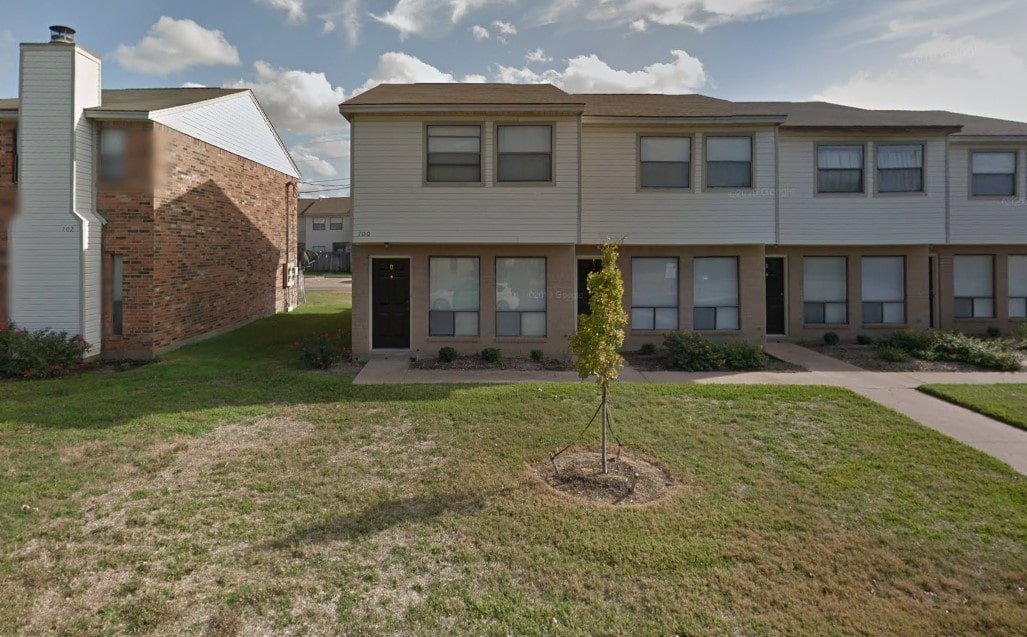 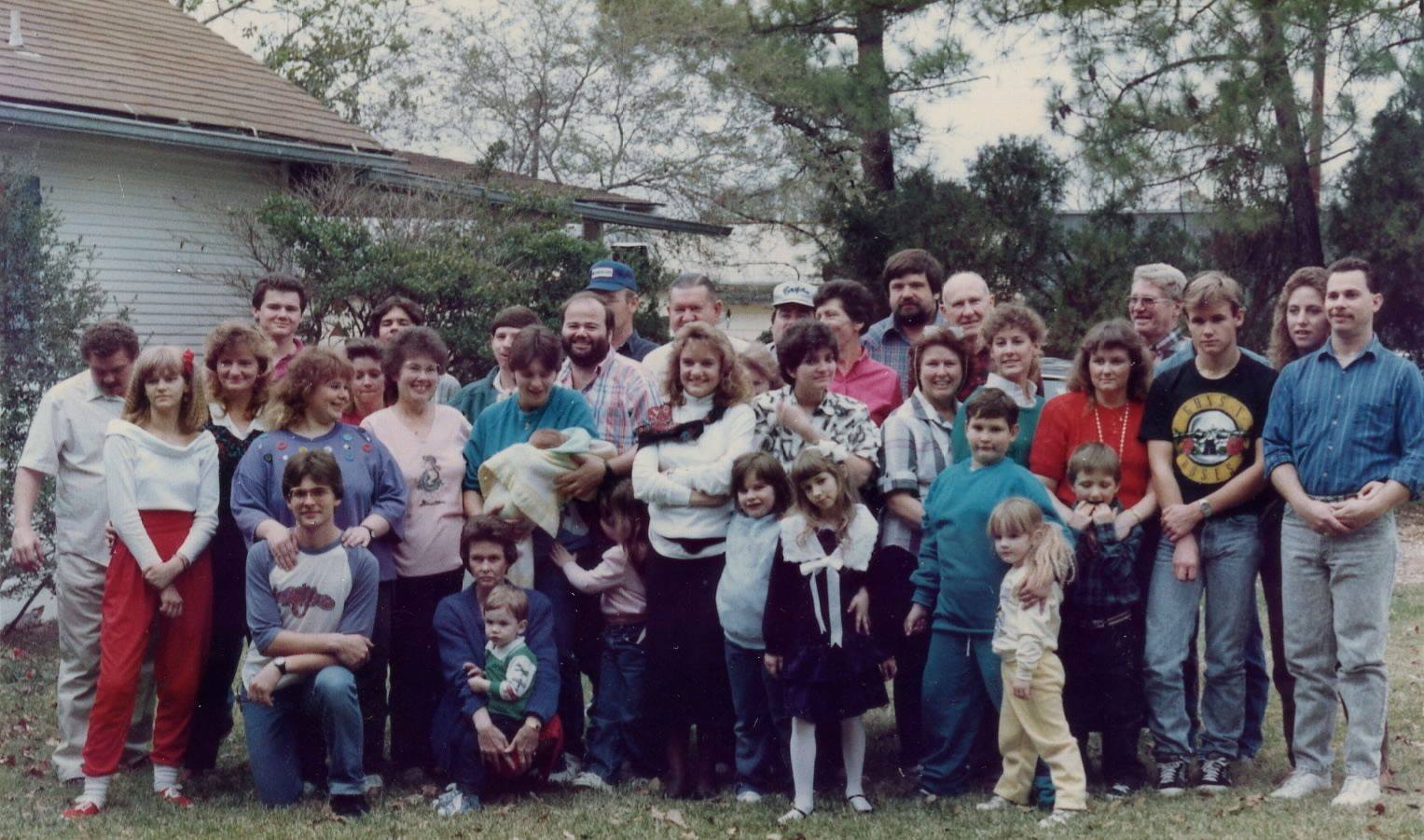 I hope the great hodges family, stop it before it continues to hurt so many people